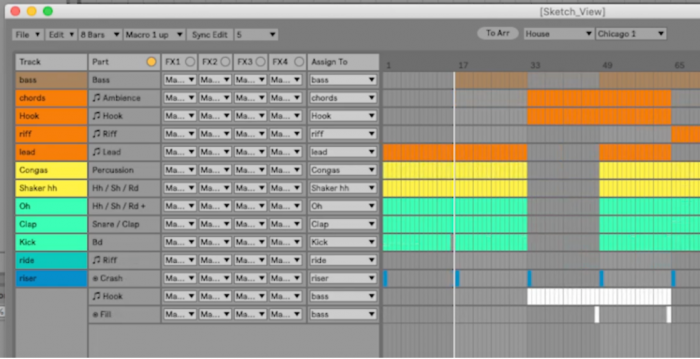 Problem / When writing a song using a Digital Audio Workstation (DAW) like Ableton Live, Logic Pro, or GarageBand, a key point of friction is arranging individual instrument parts (audio and MIDI recordings) into a cohesive song. Most amateur musicians get blocked at the arrangement phase. They can create loops that sound good together, but fail to produce a cohesive song.

Song arrangements are highly templatized. For example, a typical pop song has an arrangement made up of sections like intro, verse, chorus, verse, chorus, bridge, chorus, chorus, outro. Across sections, instrument tracks come in or out. Electronic dance music songs usually have a more additive arrangement, where tracks are added or removed over time.

Solution / An “Auto Arranger” DAW Plugin to analyze existing songs, extract the arrangement, and create a template (AKA a “ghost arrangement”) for the composer to fill in the blanks with their existing parts.

Auto Arranger will analyze an audio file, identify sections of the song, as well as when individual instruments enter, exit, or change in the mix. We train it by generating audio files with known components.

Some existing products, for visual inspiration:

Next: AI for Audio Sample Browsing