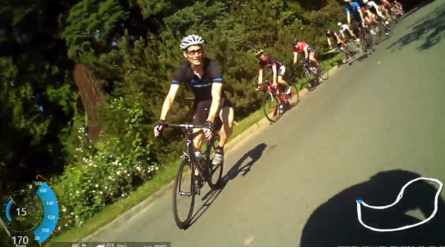 I finally won a Cat 4/5 criterium – in a race I’ve been doing off and on since the mid-1990’s. It’s 4 days later as I write this, and I’m still reveling in it. As I wrote in my 4 hour bike racer post, I set this goal because I previously upgraded my cycling license without ever winning. There’s a million reasons why winning this particular race was no big deal, but I made it the cornerstone of my mid-life crisis. I didn’t want to go to my grave without ever having won. It feels a little boastful to write this, but it’s my blog dammit. I write it for me, and I’m pretty satisfied with myself.

This was the actual race, Seattle’s weekly Seward Park Criterium. It’s open to young and old, male and female racers.

A few keys to winning:

Two weeks ago, after being aced out in the sprint yet again, I wrote down these tips for myself:

Another thing that helped was analyzing the lap times and taking a few timed practice loops around the course. In practice, I could get around in maybe 1:50, but in the race our lap times are between 1:30-1:45, so I knew there was no chance of a solo breakaway.

As it happened, there were only slow wheels to be had – so I went from the middle of the hill 300m or so from the finish. Normally, I would’ve thought that was too soon – but I managed to hold everyone off. I remember thinking – “you may never get this chance again.”

Of course, acquiring the best bike money can buy was a big part of my success.

But more importantly, I think there was a philosophical reason for winning. In the past 4 years, I’ve changed the way I think about fitness. I’m no longer a weekend warrior like I was in my 30s. I can’t coast on decent DNA any longer – I have to workout to survive. The best I can hope for is to cause my own pain (or “steady discomfort” as they say).

The thing is, when you do 30 minutes of exercise per day (OK, some days it’s 5 minutes) – you can do a half marathon without training for it. I workout less now. I don’t ride massive miles, but do try to make my short workouts intense.

Remember that startup I mentioned in my earlier post about habit formation? One of the best quotes I’ve hung on to is:

“You want to know how to paint a perfect painting? It’s easy. Make yourself perfect and then just paint naturally.” Robert M. Pirsig, Zen and the Art of Motorcycle Maintenance

Or, as I read this morning…

Turns out, if you want to win a bike race, you make yourself into a bike racer then ride naturally.

But I digress. Here are some hacks that worked for me. They’re important too.

What do you think? Cancel reply